The Yukon Astronomical Society (aka RASC Yukon Centre) is pleased to announce its SPECIAL EVENT, and welcomes its Guest Speaker: Dr. DAVID LEVY, on January 27 th , Monday, between 7 pm and 9 pm, at the Whitehorse Public Library, to present: DR. DAVID LEVY: “A NIGHTWATCHMAN’S JOURNEY: THE ROAD NOT TAKEN”

BIOGRAPHY
Dr. David H Levy, Wendee’s Husband
A short bio for a tall man. David H Levy is arguably one of the most enthusiastic and famous amateur astronomers of our time. Although he has never taken a class in astronomy, he has written over three dozen books, has written for three astronomy magazines and has appeared on television programs featured on the Discovery and the Science Channels.

Among David’s accomplishments are 23 comet discoveries, the most famous being Shoemaker-Levy 9 that collided with Jupiter in 1994, a few hundred shared asteroid discoveries, an Emmy for the documentary Three Minutes to Impact, five honorary doctorates in Science and a PhD which combines astronomy and English Literature.

Currently, he is the editor of the webmagazine Sky’s Up!, has a monthly column, Skyward, in our local Vail Voice paper. David continues to hunt for comets and asteroids, and lectures worldwide.

Entry is by donation, that goes to the O&M costs of the RASC Yukon Astronomical Observatory. 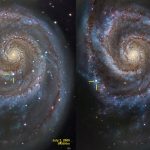