Image Credits: [An exoplanet seen from its moon (artist’s impression)] ‘iau1301a’ by IAU/L. Calçada (Shared Under Creative Commons ASA 3.0 U)

On March 19, 2018 the Yukon Royal Astronomical Society of Canada was treated by the presentation of Dr. Christa Van Laerhoven who appeared at the Yukon College in Whitehorse to speak about some interesting points of her field in detail. A senior member of the Yukon RASC, Dr. Van Laerhoven is a professional astronomer and planetary scientist at the University of British Columbia.

The opening of this presentation discussed the motivation for exoplanet research being to give context to that of our very own Earth and solar system in general. If you were a farmer you wouldn’t try to understand raspberries by simply studying one single raspberry, Dr. Van Laerhoven remarks, but instead you need to look at raspberries in the context of several different raspberry bushes, grown in different conditions, breeding raspberries together, finding out how resistant they are to various elements, and all of the information possible in order to understand why they are the way that they are. In order to understand the ways in which our Earth is normal or abnormal, we must take a look at the bigger picture.

Distances were discussed in the scale of AU, or Astronomical Units, which are meant to put into scale massive distances that would otherwise be incomprehensible to most conversations. One AU is the size of Earth’s orbit around the sun, and is equivalent to around 149.5 million kilometers (or 92.9 million miles).

‘Hot Jupiters’ were the first type of exoplanets found by astronomers. ‘Hot Jupiters’ are aptly named since they are “like Jupiter, but hot” and yet they are also different than our Jupiter in that a ‘hot Jupiter’ typically orbits its star around 0.05 AU while our Jupiter orbits the Sun at 5 AU. The question as to how this is possible without a star sucking in these giants was posed by the audience to which Dr. Van Laerhoven explained the concept of sideways velocity being how fast an object is travelling allowing it to achieve orbit. The real question, Dr. Van Laerhoven points out, is how did the ‘hot Jupiter’ come to be on this side of the snow line? In astronomy, the snow line is the point beyond which water can be solid, providing material for formation of planetary cores. Our largest planet, Jupiter, is found just beyond our solar system’s snow line. Although many theories exist, it’s still a mystery how ‘hot Jupiters’ form and why they don’t seem to conform to our concept of Jupiter in our own solar system and its history.

Exoplanets began to be discovered in the early 90’s. WASP-47 was an example of a system in which a hot Jupiter was found to be existing with companions whereas most hot Jupiters do not have companions. WASP-47 remains a mystery to this day.

The Kepler space telescope watched the brightness of stars over time. Its data brings forth variations in light which are used to detect the presence of a planet or exoplanet. An interesting phenomenon that was discovered through these observations is the existence of circumbinary planets, or planets that orbit around two stars instead of just one. On September 15, 2011 Kepler-16 was the first confirmed example of this. Science fiction became science fact and now many circumbinary planets can now be seen today as astronomers and enthusiasts continue to observe variations in the Kepler data. To try your own hand at astronomical classification alongside a community of enthusiasts and astronomers who have successfully made new discoveries, check out PlanetHunters.Org today. There’s more than just binary stars and circumbinary planets waiting to be found, hierarchical quadruples are among the more complex celestial dances described by Dr. Van Laerhoven.

The four year Kepler project gave us a lot of awesome examples of planets in the Milky Way Galaxy. Because it only lasted four years however, most examples will not be as large as our solar system and instead typically relate to the size of Mars’ orbit around the Sun, or smaller. Many compact systems were observed, allowing us to begin a long journey learning about our solar system from what we find around us in space.

Kepler-11 is a solar system similar to ours, but much more compact. There are five planets within the orbit of Mercury and a sixth planets with a slightly larger orbit. Kepler-444 is a whole solar system of likely all-rock planets within a very tightly compact configuration, the furthest planet being 0.08 AU from the star.

“Super-Earths” (and “Mini-Neptunes”) appear to be the most common type of exoplanet that can be found, and yet there are none in our own solar system. Planets with an orbit closer than Mercury are also very common in general. This is also something we don’t find within our own solar system though. These facts are introduced as some of the early realizations that our solar system is not necessarily as normal as we expected.

J1407b was a one-time observation of either a massive planet with an extensive ring system or the early formation of a solar system (a forming star surounded by a disk). Unexplained moments like this are common as we stretch our wings into the galaxy and astronomers are working to close the gap between theory and fact.

Tabby’s Star (also known as Boyajian’s Star or KIC 8462852) was an unknown phenomenon recently speculated to be an alien mega-structure by the mainstream media after discovery was made in 2015 on the Planet Hunters website referenced earlier. Many theories exist surrounding what the change to luminosity in Tabby’s Star means including an uneven dust ring, planetary debris, other stars or planets in a tight and perhaps unusual orbit, and so on. From October 2015 to September 2017 multiple space agencies including the SETI Institute attempted to search for signals near KIC 8462852 identifying the use of technology or radio transmission but no evidence was found. Dr. Van Laerhoven and the audience at Yukon College briefly entertained the outlandish theory of a Dyson Sphere being used by an advanced civilization to siphon the power of the star. Through logic and reasoning this theory was found to be very unlikely due to a few key points such as cost to benefit ratio likelihoods, the lack of infrared excess to suggest such an event taking place, and the fact that Tabby’s Star remains visible today with a 130mm telescope. One thing is for sure, a complicated and yet to be explained event took place which astronomers will seek to uncover in regard to KIC 8462852.

Returning to the main exposition of the presentation, the context for Earth through exo-planetary science, the habitable zone was covered for the audience. As many readers will know, the habitable zone is the range from a star where liquid water can be found on its surface. How far this is depends on the temperature of the star. We have found planets in the habitable zone! In Kepler-186f (slightly larger than Earth, with a tighter orbit) plants might appear red since its close star gives off its light at mostly red wavelengths versus Earth’s green wavelength from our sun. This has even inspired a famous retro sci-fi poster meant to bring more interest to the field. Kepler-37b is the smallest exoplanet discovered so far, made possible by its star’s steady and reliable movements. The theoretical lower limit for the average number of planets per solar system (or per star) that can potentially host life is thought to be ~0 (one example, the Earth, out of many stars) with the upper limit being 5. In actual observation thus far, researchers have discovered 0.2 – 1.5 depending on the exact definition of the habitable zone being used in regards to planet sizes agreed to be required for a rocky surface. All of this is still in development, but astronomers remain optimistic.

Exoplanets are now being discovered very often, and have been making the news frequently lately. So far, we still don’t have a lot of context for our solar system and our planet Earth. Exoplanets have, however, began to unlock some of these mysteries. Some of the questions that remain include how planets form and migrate, why we lack planets interior to Mercury in our own solar system, and what “Super-Earth” / “Mini-Neptune” planets are like as well as why we don’t have any in our own solar system. Direct imaging, the radial velocity method, the transit method, and the astronometry method are all being used to further our knowledge.

Although recently widely being discovered, exoplanets began to be seen in 1989 and took off in the 90’s. Approximately four thousand confirmed exoplanets are known (and many many more planet candidates). The most prolific methods of discovering exoplanets, transits and radial velocity, require the orbit planes of the planets and our line of sight to be aligned (or nearly so) to enable detection, but upcoming instruments will allow discovery of other systems that are not seen edge-on. The complicated and different nature of each star also adds to this challenge. The next breakthrough in understanding exoplanets will come from understanding stars better (stellar astrophysics). Transit spectroscopy will come into play as well thanks to the ten billion dollar James Webb Space Telescope scheduled to be launched in 2019 through a collaboration between NASA, the European Space Agency, and the Canadian Space Agency.

☆ During this event Viktor Zsohar (Co-Founder and President of the Yukon Astronomical Society) also announced that we are still hopeful that the Yukon Government will support our project in regards to the Whitehorse Observatory. 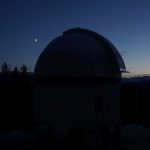